A long-standing client was asked to supply a drone video for a Manchester construction company to visualise the interior of their newly completed office block in at New Bailey in Manchester city centre. Normally these things are quite labour intensive and costly exercises that involve some serious computer modelling by the architect. My clever client thought we might be able to take the drone we’d used the week previously and capture a fly-thru as a demonstration of the building’s current state, and as an introduction to the building whilst they await fit-out.

I’m still fairly new to operating the drone but I’ve become comfortable flying outside and with the knowledge that I’ve got a number of safety sensors to help prevent collisions. Not so when flying indoors where I found I had to disengage the safety / crash aversion system. Worst case scenario: we damage the building, cause an injury and kill the drone! Thankfully none of the above materialised and we had really good access…albeit on a flat day for the light. 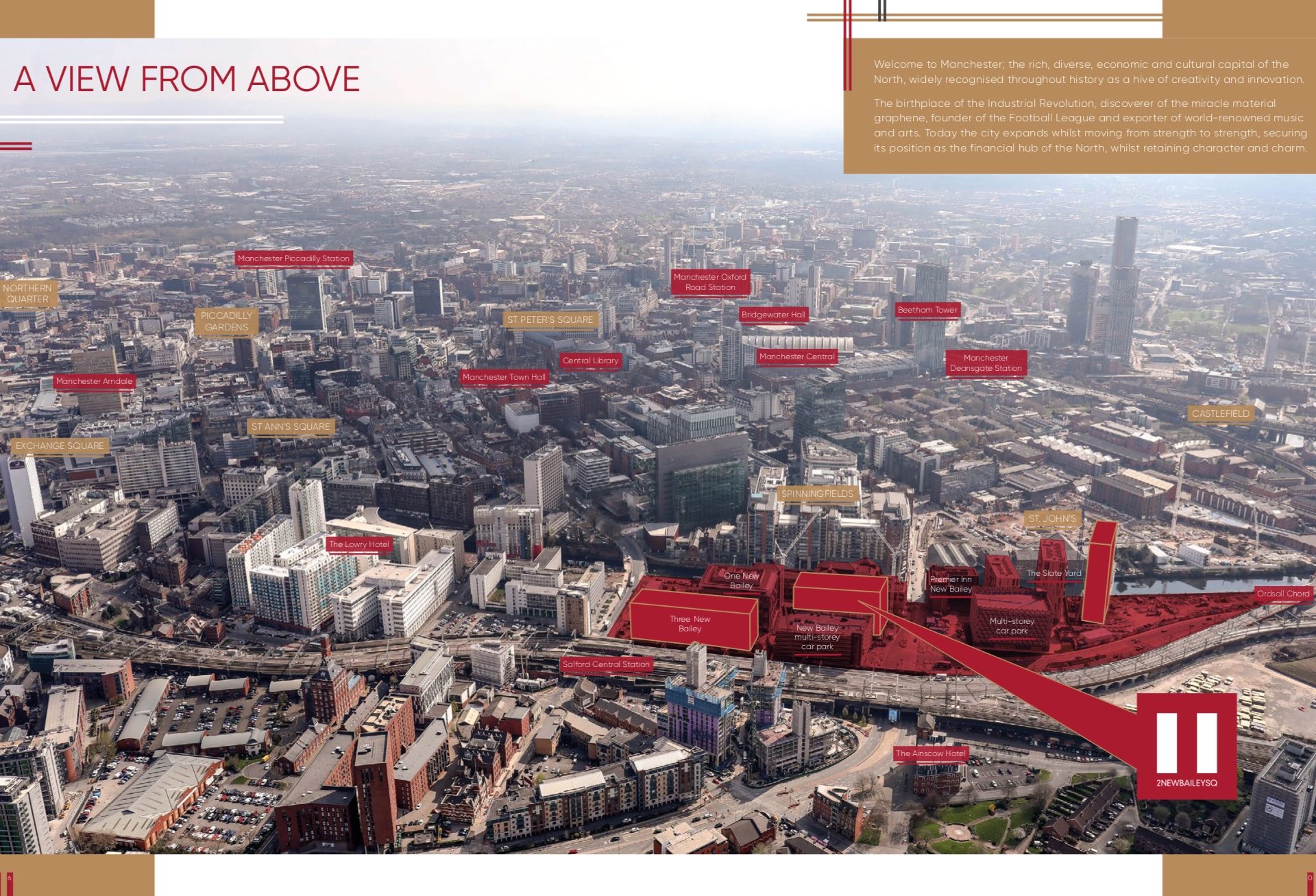 Aerial view of the New Bailey site in Manchester.

Whilst I’d have to admit that it’s not the most action-packed film we’ve ever made there’s something lovely about the smoothness of the footage and it’s strangely captivating to walk through the building and get a feel for the space. I’m still constantly amazed at how good the DJI Mavic drones are for photography and making films – the stability outdoors is bonkers enough but inside it just glides. To think that not all that long ago you’d have to build a rail to shoot that kind of video production. And yet we nipped in and out in two hours!

New Bailey is part of the wider £1bn Salford Central masterplan being delivered by The English Cities Fund, a joint venture between Muse Developments, Legal & General and Homes England. The joint venture partnership is currently delivering some of the most complex and most successful urban regeneration projects across the UK. Following the fund’s expansion in 2018, it continues to take on large-scale, challenging sites and create inspiring new places.

The English Cities Fund was created by the government to identify and break through the barriers to institutional investment and pave the way for higher levels of private investment in the reshaping of our towns and cities.

The fund has shown that high quality, mixed use area-based regeneration schemes provide viable, attractive and worthwhile opportunities for institutional investors in the medium to long term, alongside lasting community benefits and environmental improvements.

The fund’s portfolio has brought forward five schemes; in London, Plymouth, Wakefield, Salford and Liverpool – with an estimated total completed development value of around £2 billion. Together these will produce over 8.5 million sq ft of mixed use floor space, including more than 4,000 new homes, and bring back into productive use almost 100 acres of brownfield land.

Manchester is widely regarded as the educational, commercial and administrative capital of the North. With the largest student population in Europe, there are over 99,000 students studying at the universities in Greater Manchester. The local economy is thriving with many blue chip organisations choosing Manchester as the location for global headquarters. More than 50 international banks and in excess of 600 international companies operate within the city.

With a population of 2.7 million, a workforce of 1.76 million, a GDP of £28 billion and up to 200 languages spoken, Manchester is fast becoming one of Europe’s most influential cities. New Bailey is adjacent to the heart of the city’s business district with occupiers such as RBS, HSBC, Bank of New York and Barclays immediately opposite, along with many other major organisations.

– 22 universities within an hour’s drive of Greater Manchester
– Around 66% of students who study in the North West gain employment in the region after graduating.
– Manchester is the largest travel-to-work area of any conurbation outside of London.
– The city is home to the 2 most applied-to Universities in the UK – The University of Manchester and Manchester Metropolitan University.

And view more of our commercial photography work here

#Photographers and #video #production for #industry and #construction in #Manchester

JPL – Photography Video and drone – contact us for a package quote.